On 9th of July 2019, a top-ranking Chinese delegation under the direction of the Chairman of the Hebei Provincial Committee of the CPPCC, Mr. Dongsong Ye, visited Comde-Derenda GmbH. At the production site in Stahnsdorf, they were introduced to the company and learned about development and manufacturing of the company’s devices in the field of environmental monitoring. 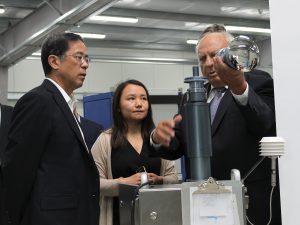 At the company premises, the managing directors of Comde-Derenda GmbH, Norbert and Haro Derenda, took the visitors on a tour through the production site first. The different devices, manufactured in Stahnsdorf, like a SPM sampling system, an online monitoring device of the APM series and automatic and manual weighing systems were shown in a small exhibition.

Afterwards, the company owner, Mr. Norbert Derenda, held a presentation about the company’s history and development focus in environmental monitoring. A following lively conversation about the cooperation with the subsidiary Comde-Derenda Ltd. In Wuxi, further projects as well as business development projects of the Land of Brandenburg rounded the visit.